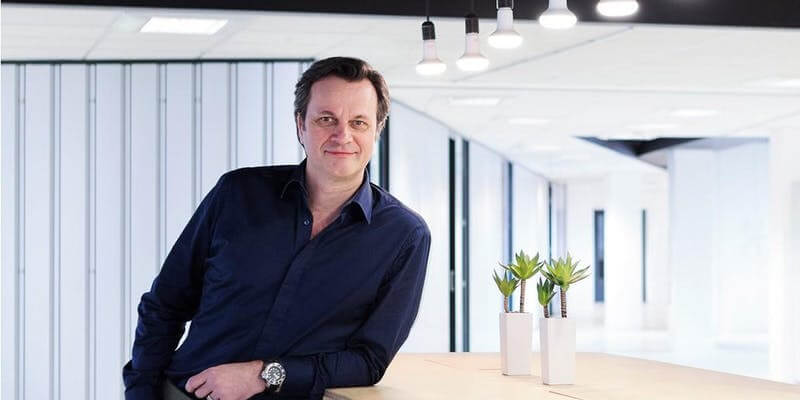 In Conversation with Francois Mazoudier – TMRW Chairman and Founder

Francois Mazoudier has been building technology and digital companies since the early 1990s; in that time he built five tech startups, tasted the very highs and lows of building businesses; he enjoyed a great ‘start-up to IPO’ ride (Real Networks, the inventors of streaming media), suffered the dotcom crash of the early 2000s, a company bankruptcy and several companies that were destined to great success but didn’t make it. He is open and honest about the harsh realities of life as an entrepreneur and the particularities that make the tech world so appealing yet so weird and has a very direct, no-nonsense approach.He founded Tech Leaders Capital, a members-only co-investment club for Tech CEOs with great track records.‍

Can you tell me how TMRW came about?

‍It was a complete coincidence. I co-founded a very large pan-European accelerator (named Speed Ventures) ages ago, just before the dot-com bubble.  It became big - 10 countries and 10 offices, 100 people, $100m in cash investing and building tech businesses. Recently a friend of mine, the co-founder of Croydon Tech City (a local pressure group supporting the interests of young tech talent) was offered an old building in Croydon, financed by the government and the local council, to build a tech hub. They realised they did not have the expertise themselves, so she called me and said "look, you've done this before. Why don't you come and build one again here?"

‍And what stage is TMRW in now?

‍We’re now two years old, have around 200 members split across coworking desks and private offices; we have another 100 seats and we’ll be full. It’s a great achievement considering that South London has never had a coworking space of this size before (with 21,000 sq ft TMRW is south London’s largest workspace).

‍What has been the biggest challenge so far?

‍There are many challenges. The construction was the biggest one but now that we’re through that, it’s now all about people; in the end, business, any business, is all about the quality of its people. So we’re now focusing on working out through smaller issues around our team and which members we let in, to foster collaboration, productivity, create and keep a positive vibe and build a true community (I hate the word, it’s been misused and distorted so often).

The fact that I could craft a workspace from scratch, somewhere new and different where entrepreneurs, innovative companies big and small, corporate and small companies can all enjoy, mix in, share and connect. Something not optimised for revenue per square inch like all / most other spaces, but somewhere where people love staying in, learning in, connecting with interesting peers, do business together, have lots of natural light, windows with real fresh air, not aircon all day, etc… A space to live in, not another set of tiny offices in a long, narrow corridor, run by property developers who only think about optimised rent.Secondly, being free of complex shareholding structures; I've always had shareholders, investors, people of varying degrees of intelligence and motivation, who always had a view which was not necessarily aligned to mine because they had an angle that suited them. For the first time, I'm doing something which is good for the economy, good for the local community and transforming the area into a beacon of hope and positive energy. And I'm doing this the way that I want, not ruled by somebody else who I don't really respect or having to do something because I think I need to please them. And that's really gratifying. I don't mind the risk; the buck stops here, every bad decision and mistake is mine, and I have no backers, no financial safety net, but I can live with that.

‍Where do you hope TMRW will be in a few years?

‍I'm hoping and then I'm planning. I'm hoping that TMRW will be a place that is used as the reference for new coworking and office spaces for companies south of the Thames river, all the way down to the southern coast. What I'm planning for is to make this a profitable fast-growth business with a 10-year life expectancy, which would then generate a brand and a business model that can be replicated throughout the UK and Europe. What do you need right now?Great members whose business I can help flourish, strategic partners and awareness. What we’ve noticed is that once we give prospective members a tour, they all wish to stay. But getting noticed, even by those living locally, has proved to be more challenging. We’re starting a marketing campaign in September to address this. We’ve attracted great corporate partners such as The Body Shop, Cap Gemini, The Home Office, the local Council etc. But we need more!